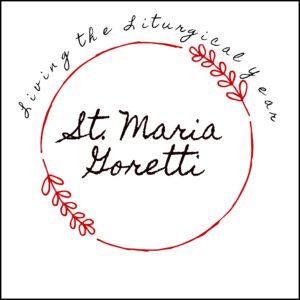 Today in the liturgical year we celebrate the life of a young saint who lived in Italy during the turn of the 20th century. This was a hard-working little girl from a poor farming family, whose father died when she was nine, requiring her family to move in with another family. When she was 11, one of the sons of the family they lived with, Alessandro, made sexual advances toward her. When she refused him, he stabbed her 14 times. As she was dying in the hospital she forgave him. He was imprisoned for 27 years, during which time he had a conversion of heart. When he was released, he begged Maria’s mother’s forgiveness — which she granted — and he became a lay brother in a monastery later in life.

Yes, it’s a pretty heavy story, to say the least. But it’s a story with so much grace and inspiration. Every year when her memorial comes around, I cannot help but consider the virtue that had been built up in this little girl over her childhood. Like so many saint stories, we see that there is no such thing as virtue that suddenly appears in a given moment. Grace does for sure! But the virtue in the moment is the result of a life of virtuous habits and living faith. The moment tests that virtue, tests that faith, and we see the real character of the person emerge. Clearly this was a girl who was living her life on earth with her heavenly home in mind every day.

We can read stories like this about child saints who lived 100 years ago during a time and place where everyone took for granted the truth of the Church and faith in God, and we can easily think: Such virtue is not possible for my children today. As I think about young Maria, I can’t help but consider my children’s yelling and hitting each other yesterday over rather minor offenses. I think about their disobedience or talking back to me, and sometimes as parents we can get discouraged. Will they ever rise above these reactions and bad behaviors? END_OF_DOCUMENT_TOKEN_TO_BE_REPLACED